Whether you celebrate Christmas, some other holiday, or no holiday, everyone has to eat. This month I'd like to share a recipe with you that I like to make for family, friends and neighbors and a recipe from my character Shandra Higheagle.

My recipe is for Caramel Corn- which could be from my character Shandra because caramel is one of her favorite things besides her horses, dog, friends, and Detective Ryan Greer. ;) 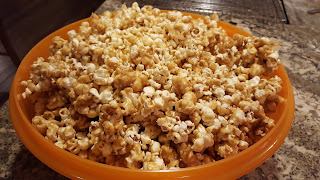 Remove from heat; stir in soda until foamy. Pour half the mixture in each pan, stirring until the popped corn is well coated. Bake 1 hour, stirring every 15 minutes. (this recipe was originally from General Mills I've adapted it)

Shandra Higheagle's recipe is for her famous cinnamon rolls- Well, they are famous with my readers and the fictional characters in Huckleberry, Idaho.

Combine milk, water, and butter in a saucepan. Heat over low heat until liquids are very warm (120-130 degrees F) ( I use the microwave and a Pyrex measuring cup) butter does not need to melt. Gradually add this to the dry ingredients and beat 2 minutes at medium speed of electric mixer, scraping bowl occasionally. Add 1/2 cup flour. Beat at high speed 2 minutes, scraping bowl occasionally. Stir in enough additional flour to make a soft dough. Turn out onto lightly floured board; knead until smooth and elastic, about 5 minutes. Place in greased bowl, turning to grease top. Cover; place in warm (98 degree F) to rise for 15 minutes.

Turn dough out on floured board and roll into a large rectangle. Spread with melted butter, cover with brown sugar, and sprinkle with cinnamon. roll up long side and cut in 1-11/2 inch slices depending on if you want fewer but larger rolls or more rolls. Place cut side down in a buttered 9" x 13" pan. Let rise in in a warm, free from draft area for 15 minutes. ( I usually fill my small sink with hot water, place a cooling rack over it and set the pan on that with a towel over the top. My daughter uses the warming oven)

Bake at 425 degrees F, for 15 minutes or until done. Drizzle with a milk and powdered sugar glaze.

(This recipe was originally a Sixty-minute dinner roll recipe but my daughter and I sweetened the dough and added the cinnamon roll elements.)

These are both treats you can make any time of the year.

In time for this season, book 7 in the Shandra Higheagle mysteries, Yuletide Slaying, is now out in audio book format.
Here are a few of the reviews:

A nice cozy mystery with a likable heroine and her police officer other half to-be,as well as a
lovable dog that has a penchant for finding trouble when she least expected it.
If you get a chance to listen to the audio version you'll enjoy it a lot. The voice-over actress is
really good and quite believable and you wanted the story to keep on going.
It had a lot of humor and some quirky characters that were fun in troubled times
and a few characters or two just might need a story of their own. *Amazon Review*
***
This is a tightly plotted mystery with several twists and turn. I was on the edge of my seat turning the pages as quickly as I could read. I adore how Shandra's grandmother comes to her in her dreams to give her clues. I also enjoyed learning about the native American culture presented through the story. *Goodreads Review*
***
Author Paty Jager is a wonderful storyteller, she has written an engaging and suspenseful mystery. I was fortunate enough to get to listen to the audio version of this book Narrated by Ann M Thompson. Mrs. Thompson’s ability to bring the story off the pages just make the reading experience that much better. Mrs. Thompson's voice, accents, diction, and timing are captivating.

I definitely recommend this book to Paty Jager fans, fans of Shandra Higheagle series, and to all mystery buffs. If you get a chance to listen to the book as well I would recommend that too. *Goodreads Review* 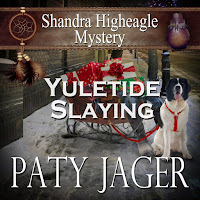 This audio book is $10, though some of the vendors have had it on sale this month so check around if you are on multiple audiobook vendor sites.

Book 7 of the Shandra Higheagle mystery series
Family, Revenge, Murder
When Shandra Higheagle’s dog brings her a dead body in a sleigh full of presents, her world is turned upside down. The man is a John Doe and within twenty-four hours another body is found. 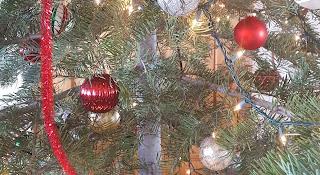 Paty Jager is an award-winning author of 35 novels, 8 novellas, and numerous anthologies of murder mystery and western romance. All her work has Western or Native American elements in them along with hints of humor and engaging characters.
blog / website /  Facebook / Paty's Posse / Goodreads / Twitter / Pinterest   / Bookbub