LOVE is a single syllable with infinite emotion. As authors, we write about it. As readers, you enjoy turning the pages until the characters find it. And as human beings, we desire it for ourselves.

I'd been single for 12 years before I ventured into the dating scene again. Oh boy, was I ever nervous. What if I found another cheating, lying man? Or worse, what if the guy turned out to be married and I'd be too dumb to see the signs. Nope. I wanted no parts of setting myself for another pain-filled relationship.

Then I met Calvin. We'd both majored in English and he taught it for 40 years We both wrote books. We were both sentimental. We were a strange matched set. He was dark; I was light. He was tall; I was short. He spoke with a deep southern accent; I was more nasal North in accent. He had a fabulous singing voice, while I sounded like a moose in heat. He was thin; I was fluffy. But we clicked. 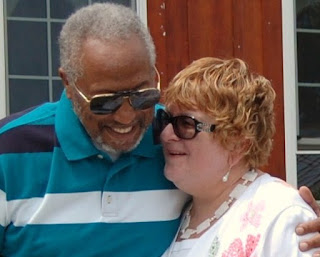 My Calvin passed away on Saturday night...at least I think it was Saturday...I have no clue what day it really is. You see, Calvin had a heart of gold, a soft mental. In the end, it was his heart, operating at 10% and a stroke that caused his death.

Even in his weakened state where he could barely form words, he slowly spoke "I ,,, Love ... You."

We had him transported home, so I ould care for him and he'd be more content. Three days later, I held his hand as he crossed over, sending him off with words of love. He was the best husband and on May 2nd we would have been married for fifteen years.

If my post is not the greatest or written in a herky-jerky way, forgive me. My eyes are pretty puffy from the crying. So, hug your loved ones hard and make your love everlasting. Next month, I'll be more together.