The stories I am writing for the Passion’s Series take place in the 1700s and my characters are Cherokee. While researching for my Native American novels I came across some amazing information about Native American celebrations. Before the white man came to their land they had no knowledge of Christian teachings. As the missionaries introduced them to Christian traditions, the Native Americans found that the story of Christmas and Christ’s birth sounded similar to some of their own tribal prophecies and considered the familiarity of the message of Jesus with their own truths handed down by their ancestors.

Many Native Americans in North America did observe a celebration near Christmas time that we call the Winter Solstice. The Winter Solstice is the longest night of the year and falls on December 21-22. It was celebrated in the Americas long before European influence arrived. Different Native American tribes associate different beliefs and rituals with it.

For example, the Hopi tribal celebrations are meant to give aid and direction to the sun which is ready to return and give strength to new life. Their ceremony is called Soyal and lasts for 20 days. During this time there is prayer stick making, purification and other rituals. Soyal is concluded with a rabbit hunt, a great feast, and many blessings.

There is a Native American story of a brave named Handsome Fellow. He could be called a Native American Santa. He is a handsome brave who wears white buckskins and brings gifts to Indian children. Other gift bringers come at different times of the year, often in the summertime. What intrigues me the most about the Native American culture is their love for giving. The gift bringing and giving element is always a part of the American Indian culture, whatever the occasion is for a gathering.

I was struck by the words of Looks for Buffalo, an Oglala Sioux spiritual leader, the full-blood Oglala grandson of Chief Red Cloud and White Cow Killer, and a Cheyenne Oglala leader. He explains the meaning of Christmas to the traditional Indian people of the Americas. The following words are his own words:

"Traditional American Indians are raised to respect the Christian Star and the birth of the first Indian Spiritual Leader. He was a Star Person and Avatar. His name was Jesus. He was a Hebrew, a Red Man. He received his education from the wilderness. John the Baptist, Moses, and other excellent teachers that came before Jesus provided an educational foundation with the Holistic Method."

"The Indian Culture is actually grounded in the traditions of a Roving Angel. The life-ways of Roving Angels are actually the way Indian People live. They hold out their hands and help the sick and the needy. They feed and clothe the poor. We have high respect for the avatar because we believe that it is in giving that we receive."

"We are taught as Traditional children that we have abundance. The Creator has given us everything: the water, the air we breathe, the earth as our flesh, and our energy force: our heart. We are thankful every day. We pray early in the morning, before sunrise, to the morning star, and the evening star. We pray for our relatives who are in the universe that someday they will come. We also pray that the Great Spirit's son will live again."

"To the Indian People Christmas is every day and they don't believe in taking without asking. Herbs are prayed over before being gathered by asking the plant for permission to take some cuttings. An offer of tobacco is made to the plant in gratitude. We do not pull the herb out by its roots, but cut the plant even with the surface of the earth, so that another generation will be born its place."

"It is really important that these ways never be lost. And to this day we feed the elders, we feed the family on Christmas day, we honor Saint Nicholas. We explain to the little children that to receive a gift is to enjoy it, and when the enjoyment is gone, they are to pass it on to another child, so that they, too, can enjoy it. If a child gets a doll, that doll will change hands about eight times in a year, from one child to another."

"Every day is Christmas in Indian Country. Daily living is centered around the spirit of giving and walking the Red Road. Walking the Red Road means making everything you do a spiritual act. If your neighbor, John Running Deer, needs a potato masher; and you have one that you are not using, you offer him yours in the spirit of giving. It doesn't matter if it is Christmas or not."

"If neighbors or strangers stop over to visit at your house, we offer them dinner. We bring out the T-Bone steak, not the cabbage. If we don't have enough, we send someone in the family out to get some more and mention nothing of the inconvenience to our guests. The more one gives, the more spiritual we become. The Christ Consciousness, the same spirit of giving that is present at Christmas, is present every day in Indian Country."

I hope everyone has a very Merry Christmas, filled with many blessings and lots of giving. 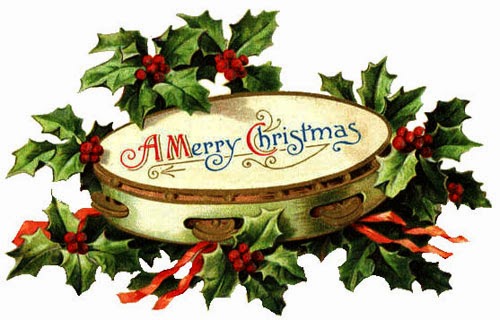 Photos from Google Commons.
Posted by Caroline Clemmons at 1:30 AM