THANKS FOR A SUPER LAUNCH DAY FOR THE MOST UNSUITABLE COURTSHIP!

Thanks to everyone who made the Facebook launch day for  my western historical romance, THE MOST UNSUITABLE COURTSHIP, fun. Please spread the word and make this book a bestseller on Amazon and other sites.

This book was difficult to write. I started before we decided to move from our rural home and downsize to a home in the city. Although I love our new-to-us home and location, moving about killed us. We had accumulated way too much stuff and were forced to make hard decisions about what to discard. In fact, we are still making those decisions.

Trying to get into the writing zone while moving proved almost impossible. My Hero did far more than his share of packing, hauling, and sorting. And there was a lot to haul to charities or the dump. We saved some collectibles so long they were no longer collectible and qualified only as junk.
Anyway, now we’re moved into our cozy home that is close to everything. We love the convenience. But I have digressed.

The heroine of this book is Renata “Rena” Hausmann Dmitriev, who has come from Bavaria with the man who rescued her from death. To protect her further, Abram Dmitriev married Rena in name only. Now she’s a widow and curious to know more about what goes on between men and women.
Here’s an excerpt from the book: 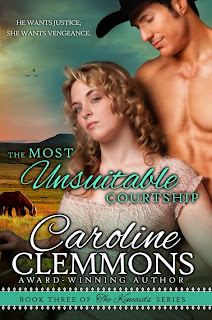 She emerged from the brush straightening her trousers and shoving her pistol back into her waistband. “Where do you think those men are going?”
“Indian Territory. They’ll steal all they can before they reach the Red River and leave no survivors to identify them. They’re selling off the stolen stock along the way, so that will slow them some.” He wondered if she knew how to use the gun.
“But I saw their faces.”
He sent her what he hoped was a frightening stare. “If they knew that, you’d be dead for sure.”
She shivered, but glared at him. “Do not think to frighten me. I will do everything I can to kill these men and reclaim my gold and my mother’s locket. It is not that I care about the jewelry that once belonged to Abram’s wife. But to him, it meant a great deal, and I want it because he gave it to me.”
Storm wanted to shake her. Not that he hadn’t lived all his life with stubborn women. At least his oldest sister Pearl made sense. He’d worried about shy Sarah, especially when she’d appeared head over heels with a con man. Now that Sarah and Nate were married, she had life figured out. Nate had surprised everyone, even himself. Storm suppressed a smile and worked up his anger again at his traveling companion.
“We can be in Llano by nightfall. We’ll get a couple of rooms there and you can rest.”
She shot him a suspicious glare. “You think to abandon me in that town. If we stay somewhere, we will be in the same room so I can watch you.”
Shocked, Storm wondered what he could do with this woman. “We wouldn’t be allowed to stay in a decent hotel. You want to sleep over a saloon? Besides that, folks will be shocked when they see you in those trousers. You want people to think you’re a fallen woman?”
With her chin raised, she placed her hands on her hips. “I am a good woman. You can tell them we are married and I wear britches to ride more easily.” She held up her hand and wiggled her fingers. “I have a wedding band, see?”
He raised his hands and backed up a step. “Oh, no. I’m not even pretending to be married. If I were ready to marry, which I’m not, I’d pick a woman who knew when to let a man do his job.”
“Ha, and when I recover my dowry, I will marry a man who knows a woman can do as much as a man.”
He swept a formal bow. “And when you marry, will you be wearing the lovely gown you now wear?”
She appeared angry enough to use that Colt on him. “You are wrong to…to talk so. I do not have the English words to tell you what I think, but do not try to leave me behind. If you do, I will go after the men alone.”
Disgusted, Storm stomped over and retrieved the horses. “Then let’s go.”
They rode into Llano in late afternoon. Since they arrived mid week, the town appeared peaceful and quiet. Storm spotted a hotel by the livery he remembered.
“If you’re determined to stick to me like glue, let’s stable the horses.”
At the stable, she staggered when she dismounted and he thought she might fall. He grabbed her arms. “Steady. You’re not used to riding so long.”
“Ja, my legs do not work so well. Do not worry, I will be fine in a minute.”
She remained quiet while he dealt with the hostler and insured his rifle and saddle would be safe. He threw his saddlebags over his shoulder and retrieved the two pillowcases and box he’d tied to the saddle pommel. They ambled the block toward the hotel.
He indicated a mercantile. “Just what we need. After we get our room, let’s head for that store before it closes. You probably need to replace a few things that burned.” When she glared at him. “I’ll give you the money, all right? I don’t want folks thinking my wife runs around in men’s clothes. If anyone gets nosy, tell them you lost your bag crossing a river.”
She sniffed and sashayed as if she wore a ball gown instead of ill-fitting men’s trousers. “I will keep track and repay you when I kill those men.”

I hope you will read and enjoy THE MOST UNSUITABLE COURTSHIP. The buy links are:

Amazon in print and ebook:  http://www.amazon.com/Most-Unsuitable-Courtship-Kincaids-ebook/dp/B00G5YXI6I/ref=sr_1_1?s=digital-text&ie=UTF8&qid=1383413219&sr=1-1&keywords=caroline+clemmons

If you read this book, please leave a review on Amazon.

Posted by Caroline Clemmons at 12:31 PM